A Report on Gwrych and The Great War July 4th 2018

Gwrych Castle is a major landmark in Abergele, and along the North Wales coast, so the desire of The Gwrych Castle Preservation Trust is to include as many local people in the work, restoration and function of the Castle as possible. Diane Woodrow, our Education and Community Engagement Officer, has been busy getting many local people involved. Wednesday 4th July was the culmination of six months of hard work with 16 pupils from years 8&9 at Emrys ap Iwan school.

The Trust wanted to get the Emrys ap Iwan pupils involved because it is the school that the majority of the pupils in primary schools around Gwrych move on to. The high school pupils are the future volunteers and workers at the Gwrych Estate as the Trust renovates the Castle.

World War One was chosen because this year marks the centenary of the end of The Great War. The original plan had been to look at people from the Abergele/Gwrych area using local archives, but when Diane had her first workshop with the pupils in January 2018 it was clear that this was not the direction they wanted to go; they were more interested in looking at the mental health issues of the Great War. To help with this Stewart Harris, an ex-pupil of Emrys ap Iwan, Afghan veteran and active member of The Soldiers Charity, came to talk to them about his experiences as a soldier and of being badly injured in Afghanistan.

From this visit and their discussions they wrote imaginary letters from children to their fathers at The Front. Through discussion they realised that there was a lot that could not be repeated of the atrocities at the Front and so wrote pieces saying what the fathers could not tell their families. Both these pieces Diane edited and, with the help of the pupils and Arlena Thornton of ART Theatre, turned them into dramatic pieces. The letters to and from featured two pupils as soldiers and one as the family back home. The things that could not be said was dramatised by four of the pupils.

Continuing with the theme of mental health, one of the pupils wrote a piece looking at loneliness, not wanting to fight and the desire to run away with someone. With Diane’s help she was able to turn this into a very moving poem which was read by one of the other pupils. We called it “Escape?”

Still following the theme of emotions four of the pupils enacted a play by Aaron Shepherd about the Christmas Day Truce, looking very much at one’s own heart. The four pupils took the original script and made it their own.

The performance commenced with the whole group doing a dramatic interpretation of Flanders Mud; a poem by Geoff Skellon, a local poet, about his feelings of going to Flanders in 2014, a hundred years after the start of World War One.

This whole production – the ‘Flanders Mud poem’; the ‘letters to and from the Front’; ‘the things they wished they could say’; ‘The Christmas Truce’ play and the rendition of “Escape?” – was performed three times in the heat of Wednesday 4th July to over 200 people which included pupils from Sant Elfods, St Georges, Llanfair Talhaiarn, and Betws yn Rhos, the deputy mayor, the managing director of Cartfrei, and many members of the public.

Also on site was Bubbling Stove doing WWI demonstrations with samples of food from 1914-18 to show the change in diet and a WWI solider and nurse from the Bodelwyddan Trench Experience.

We want to say a big thank you to Shirley Williams of both Fusion Project and the Royal Welsh Fusiliers Museum for the loan of the authentic WWI uniforms which certainly added to the atmosphere of the day. 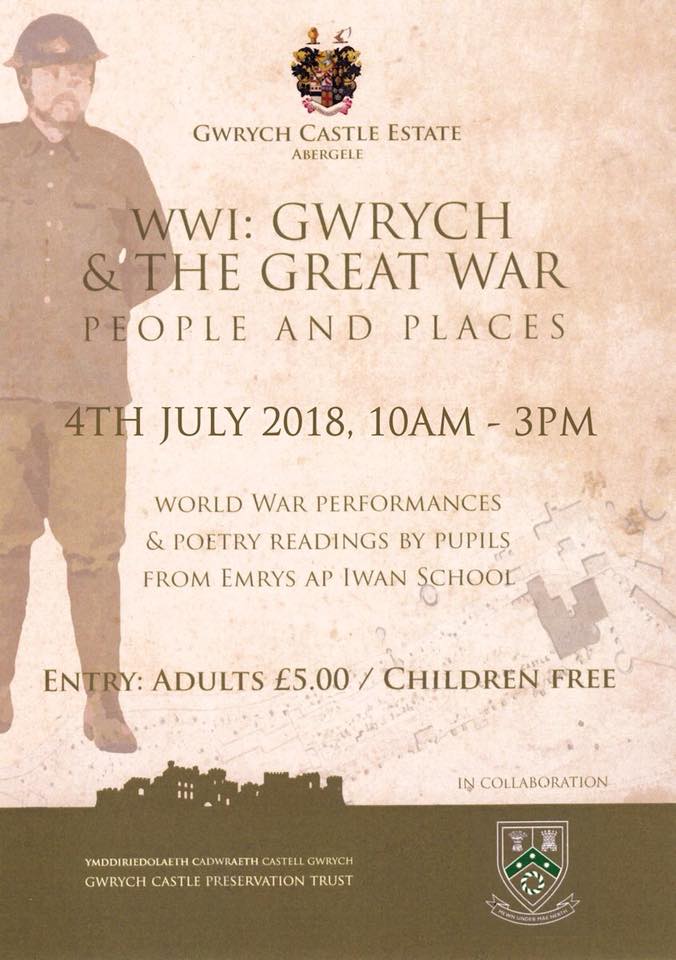 Any cookies that may not be particularly necessary for the website to function and is used specifically to collect user personal data via analytics, ads, other embedded contents are termed as non-necessary cookies. It is mandatory to procure user consent prior to running these cookies on your website.

VIEW OUR PLANS FOR THE FUTURE OF GWRYCH CASTLE